In recent years, Cuba has finally started to open up to the world, after decades of communist rule. Whilst still a communist country, some private enterprise is now allowed, and international trade is a growing aspect of Cuba’s economy. This has had a revolutionary impact on Cuban food. Once bland state-owned restaurants are now being replaced with private enterprises, selling freshly cooked meals oozing with flavour. A Caribbean-influenced cuisine, with hints of Spanish and African, Cuban food is finally emerging from the shadows. Restaurants, tiny paladars, bakeries and street food stalls are just some of the places where you can tuck in. In this article, we’ll introduce you to some of the most popular dishes to enjoy on a holiday to Cuba. So here are your 6 Delicious dishes in Cuba.

Where better to start than the national dish of Cuba? Ropa vieja involves the shredding of perfectly cooked beef, mixed with a tomato sauce and served on a bed of white rice. The meat tends to be accompanied by friend plantain or other vegetables and is available in most of the tourist hotpots around Cuba. Beef can be quite scarce in the country, so this dish isn’t always available at a local level, but you’re sure to find it on at least some of the menus you come across in the country.

A mouthful to say and even more of a mouthful to try, Pernil Relleno De Moros Y Cristianos is another Cuban classic. This dish involves one of the country’s most popular and readily available ingredients – black beans. The beans are slowly stewed with white rice before being stuffed into a perfectly marinated pork shoulder, mixed with garlic, oregano and orange. The whole lot is then roasted to perfection, creating an explosion of flavours as the marinade infuses with the meat. True Cuban comfort food and a must-try on any visit to the country.

A hearty lunchtime meal, once more making use of black beans. A delicious blend of beans, avocado and oregano, this is a classic meal in Cuba. If you want an extra addition of flavour then a helping of bacon can enhance the meal even further and is usually an option in good restaurants across Cuba.

Another simple classic, the Cubano, or Cuban sandwich is exceedingly popular stateside, especially in Florida, where it graces many a café menu. Thought to have originated in the cigar factories and sugar mills of Cuba, the Cuban sandwich has evolved significantly over the years, but the authentic recipe is roughly as follows. Cuban bread is sliced and lightly buttered before a coat of yellow mustard is spread on the loaf. Then comes the filling of roast pork (slow roasted and beautifully marinated), ham, slices of swiss cheese and pickles. It all sound quite familiar to a western palate but it’s been a staple of Cuban cuisine for more than 100 years. 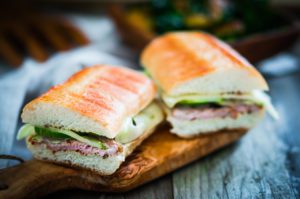 Boliche is another Cuban dish perfect for a carnivore, as it makes use of two different meats. It is a pot roast dish, in which a joint of beef is stuffed with ham and simmered in water and onions until the whole thing is juicy and tender. Potatoes are then added alongside peppers and spices such as coriander and oregano before the dish is simmered. Served with white rice, plantain and black beans, it’s another hearty meal that’s sure to keep you coming back for more.

Much of Cuba’s cuisine is influenced by other countries, such as Spain or the USA. But tamales are about as Cuban as it gets, a truly indigenous dish. Freshly ground corn is packed with seasoning and rolled into corn leaves before being cooked and served fresh. A typical Cuban street food, you’ll find it everywhere you go in the country, making it a perfect snack to keep you fueled on the move. 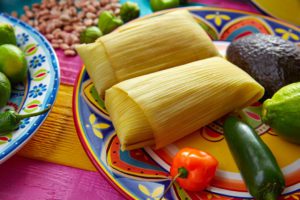 So there you have it, 6 Delicious dishes in Cuba. Wherever you go in Cuba, you’ll find a wealth of local dishes and dishes inspired by neighbouring countries. Western imports such as pizza are also starting to have an impact on Cuban cuisine, as the country opens up to the world. The best way to enjoy a holiday to Cuba is to try a bit of everything, local cuisine isn’t too unfamiliar to a western palate and there’s nothing too rogue about the food!