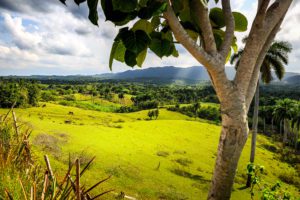 Artemisa Province is one of the two new provinces created from the former La Habana Province, whose creation was approved by the Cuban National Assembly on August 1, 2010, the other being Mayabeque Province. The new provinces came into existence on January 1, 2011.

The new province is only larger than Havana city and Mayabeque, but with more population than four other Cuban areas. It is the most densely populated, after Havana city and Santiago de Cuba.

The economy of the Artemisa province is based mainly on agriculture (fruits, potatoes, rice, vegetables, sugar cane) and industry of building materials (two cement factories), food processing industry and power plants. It contains the vital port of Mariel on the northern coast. The province is also essential in the military sector with the main Cuban Air Force base (San Antonio de Los Baños) the Western base of the Cuban Navy (Cabañas Bay) and the Military Academy (College) “Antonio Maceo” in Caimito.

There is a lot of exciting places to see and visit in the province. Our top choices are Soroa National Park and Las Terrazas National Park.

Ask us about visiting Artenisa province when you call the Cuba holiday experts free on 0800 270 7644.