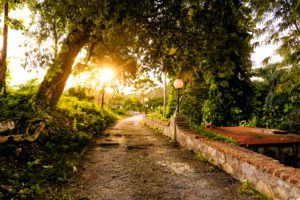 The Artemisa Province weather is generally rainy tropical weather, with summers relatively humid (Savannah). However, in Sierra del Rosario, the experts classify it as a rainy tropical climate with a very humid tropical forest summer, unlike the rest of the province.

Temperatures are relatively high in the territory. The annual average variates from 24 C⁰ to 26 C⁰ in the planes, although they do not exceed 35 C⁰ in the summer. However, there has been a reported temperature of 20 C⁰ at the highest points in Sierra del Rosario. In the winter, the temperature descends until 4 to 8 C⁰ in the morning.

The weather is cooler during the winter months from November to April, and it is known as the “winter period”. Whereas the warmer months, from May to October, are known as the summer period.

The relative humidity of the territory is high that ranges at about 80%. The high levels of moisture typically occur at sunrise and are generally above 90%. The lowest ones gradually descend until 50 to 60 per cent in the territory’s interior at noon. Western and central regions are the wettest areas in the country, along with the mountainous zones. The rainy season goes from May to October, and it is especially strong in September and October.

We do recommend that you come prepared for the weather as it can change suddenly especially during the tropical storm season.

Call us free on 0800 270 7644 to plan your Cuba Holiday and ask us when the Artemisa Province weather is best for you.