Be surprised by the exotic municipality of Bahia Honda in Artemisa, Cuba. 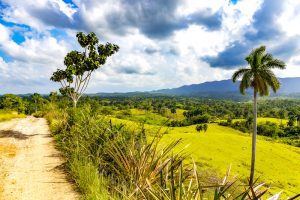 The exciting and winding road of the north of Soroa follows the coast until reaching the municipality of Bahía Honda and the north of Pinar del Río. This is one of the regions of Cuba where most of the research that has been done concerns aboriginal peoples of Cuba. Here you can find some of the most interesting archaeological sites of the island, such as Cueva del Perico I and II caves; the Conchal de la Altura, the Conchal Maní-Maní, the Cueva del Carenero cave, the Cueva de Felipe cave, and the caves of San Claudio I and II.

It is located on the northern shore of the island, in an inlet of the Florida Straits, 70 km (43 mi) west of Havana. The sheltered bay that gives the name to the municipality contains an industrial port. It marks the eastern extent of the Colorados Archipelago.

This area typically has a pronounced dry season, but average monthly precipitation does not get lower than 68 mm (in March) in Bahía Honda, making this a more humid locality than many others in the region. According to the Köppen Climate Classification system, Bahía Honda, Cuba has a tropical rainforest climate, abbreviated “Af” on climate maps.

Bahía Honda was once one of the naval bases leased to the United States under the Platt Amendment but abandoned in 1912 in turn for an expansion of the area leased around Guantánamo Bay.

In this region, handcraft has also developed, mainly wood carving, fabrics, and jute. The best works can be seen in the areas of Luis Carrasco and Bahía Honda. Bahía Onda, is a small and crowded city with a beautiful church. The town is relatively close to Havana, but the traveller may feel somehow isolated from the larger urban vibes, especially since the road gets much worse once you leave Soroa. There is however a lot to do in this beautiful town.

Ask us about a trip to Bahia Honda on your next Cuba Holiday!