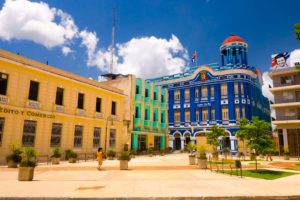 Camagüey (Spanish pronunciation: [kamaˈɣwej]) is the largest and flattest of the provinces of Cuba. Its capital is Camagüey. Other towns include Florida and Nuevitas.

Camagüey is mostly low lying, with no major hills or mountain ranges passing through the province. Numerous large cays (including what used to be one of Fidel Castro’s favourite fishing spots; the Archipiélago Jardines de la Reina) characterize the southern coasts, while the northern coast is lined by Jardines del Rey of the Sabana-Camagüey Archipelago.

Sandy beaches are found on both coasts also, and despite a large tourism potential, the province has seen little development in that area except for Santa Lucía beach, on the province’s north coast.

The province, however, is not just about beaches. You will find still keep virgin forests where you can find peace. The weather doesn’t change excessively throughout the year, and the average annual temperature is 24.7 ºC.

Economy
The economy of the Camagüey province is primarily cattle and sugar (in the north and south) farming, and the province is known for its cowboy culture, with rodeos frequently held. Chickens and rice are also farmed, and a small citrus fruit industry exists. The capital city also has one of the few breweries on the island.

There is a lot for you to do when you are on a Cuba holiday in Camaguey Province. Why not also try Cayo Sabinal, Florida Cuba, Guimaro Cuba or the Plaza del Carmeny Camaguey.