Walk in the Constitution Park Guaimaro while enjoying a piece of Cuban history in Camagüey. 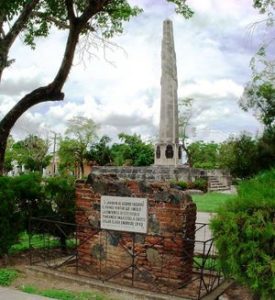 The Parque de la Constitución (Constitucion park guaimaro) is located in the middle of Guáimaro, and its name comes from being the city where the first Cuban Constitution was approved. A monument erected in 1940 commemorates these facts dating back to 1869. On the base of the monument there are some bronze portraits of José Martí, Máximo Gómez, Carlos Manuel de Céspedes, Ignacio Agramonte, Calixto García and Antonio Maceo, the most representative figures of the Cuban independence.

In the park, we can also see a mausoleum of the first Cuban heroin, Ana Betancourt, who strived for equality for women and the abolition of slavery in the First War of Independence.

The constitucion park Guaimaro is the most important civic space in Guaimaro city. In it, transcendental events of the Cuban nation have been developed; what distinguishes it today is a monument that is a symbol of Guaimaro: the Constitution members Obelisk and Cuban patriots of the nineteenth century.

The slim, majestic obelisk wasn´t always there; it was built in 1944 to visually close the square and resignify the space that was first Public or Arms Square during the colony, then in 1928, by a resolution of the City Council, it was named Constitution Park, and designers gave it a symbolic structure divided into six paddocks or large parterre representing the old six Cuban provinces: Oriente, Camaguey, Las Villas, Matanzas, Havana and Pinar del Río.

Cuba really is a stunning country, and there is so much to see and do when you are on a Cuba Holiday. Our experts will happily discuss everything you want to see to make sure you get the right holiday for yourself.