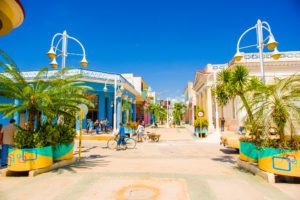 Ciego de Ávila Province (Spanish pronunciation: [ˈsjeɣo ðe ˈaβila]) is one of the provinces of Cuba and was previously part of Camagüey Province. Its capital is Ciego de Ávila, which lies on the Carretera Central (central highway), and the second city is Morón, further north.

The province was separated from Camagüey Province in 1975 by the government.

Off the north coast of the province, some (cays) of the Jardines del Rey archipelago are being developed as tourist resorts, principally Cayo Coco and Cayo Guillermo. Mangroves characterise the south coast.

Between Morón and the north coast are several lakes, including the Laguna de Leche (the Lagoon of Milk, so-called for its white appearance because of large lime deposits underwater) which is the largest natural lake in Cuba.

Economy
The central part of Ciego de Ávila Province is used for cattle ranching, elsewhere in the province sugar, pineapples and citrus fruit are grown. Pineapples are the staple crop, but sweet potatoes, potatoes, yucca, plantains, and bananas are also cultivated for national consumption.

We can include a stay in Ciego de Ávila when you book your fantastic Cuba holiday with us!