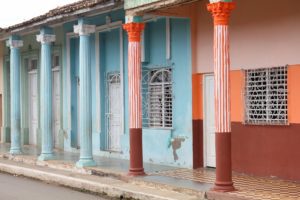 Moron is a city and a municipality in Ciego de Ávila Province in central Cuba. It is one of ten municipalities in the province and is the second in importance and the oldest. Morón is the closest city to the tourist resorts on Cayo Coco and Cayo Guillermo.

Moron has the largest natural water mirror in Cuba, Laguna de Leche, of 67.2 km2 (25.9 sq mi). Cayo Coco and Cayo Guillermo, two of the cays of Jardines del Rey archipelago is located north of Morón, across the Bay of Dogs (Bahia Perros).

Previously the municipality was much larger, being one of nine in the previous province of Camagüey. In 1943, it was divided into the barrios of Coronel Hernández, Chambas, Cupeyes, Este, Guadalupe, Mabuya, Marroquí, Oeste, Punta Alegre, Ranchuelo, Santa Gertrudis, Simón Reyes o Sandoval and Tamarindo. 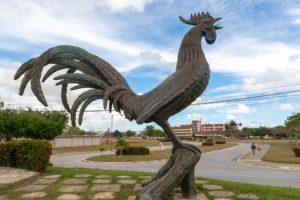 The first residents of Morón were Creoles from Sancti Spíritus, although among them were also said to be a group of Spanish sailors who, having navigated all around Cuba, had disembarked nearby and had decided to settle here. They were from Andalusia, in Old Castile, Extremadura, Galicia and the Canary Islands, among other places.

In the first half of the 20th century, the archipelago and the nearby keys had attained little development. The town of Morón, which started as a community in 1750, survived based on a limited, non-mechanized agricultural, and mostly sugar, production. The settlement pattern that prevailed in the coastal areas and keys was that of squatters, people living in inferior, tach-roof, earth floor dwellings, usually not more than five houses together.

Making charcoal and fishing, in many cases, both activities at the same time were apparently the main economic activities on the keys and their surroundings. Fishing was mostly done by using dinghies moved by sticks, oars, or small sails, which did not allow them to venture out of the key shelf. These were the ones used to reach the mainland and to transport products out. In the settlements, livestock was mostly limited to a few animals. Still standing at some places are remains of the stone fences that were used to confine the animal.

Living conditions here were in general tough, due mostly to the remoteness of the area and the lack of proper means of transportation. Transportation usually consisted of a small sailboat that travelled back and forth once a month, and whose journey took many hours, Reaching the mainland from Cayo Coco, for example, took around 10 hours, in addition to the risks that had to be run at sea.

During Cuba’s 1st War of Independence in 1869, the town of Moron became the northern end of the line of forts, the Trocha from Júcaro to Morón built by the Spanish to contain Cuban rebels on the eastern end of the island. The Trocha also included a railroad line to move troops and supplies, the first government railroad line in Cuba.

Recent history
The town of Morón began to grow in 1915 when Colonel Jose M. Tarafa bought the Trocha rail line as he began to assemble the Ferrocarriles del Norte railway line. Morón was chosen as the line’s headquarters. The railway’s maintenance shops and a large central station became the central feature of the town. Morón became the junction of a network of several branch lines and sugar lines which stimulated the expansions of sugar plantations and centralized sugar mills which previously were located mainly in the south and central part of Cuba.

In the 1960s a road was built through the marshland to the coast, and in the 1990s this was extended on a man-made causeway to Cayo Coco and Cayo Guillermo, where several hotels were built. Many of the hotel workers live in Morón and commute to work in specially provided buses.

Economy
The main economic activities are agriculture and tourism.

Transport
Morón railway station is an important junction point between the lines Santa Clara-Nuevitas, and Júcaro-Ciego de Ávila-Morón. The northern state highway, “Circuito Norte” (CN), passes through the city; and the main road from Ciego de Ávila to Cayo Coco also skirts it.