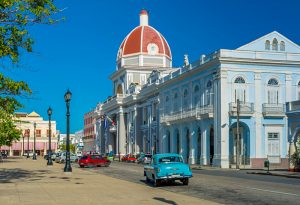 The Palacio de Gobierno (Government Palace) of Cienfuegos is located in the vicinity of the beautiful Parque José Martí, it constitutes the most emblematic building within the stunning jewel of the south of Cuba. Its historical, social and architectural value has led it to be declared a site of Cultural Heritage of Humanity by UNESCO in 2005.

The historic building dates back to 1819 when it was first built in this colonial city. In 1840, with the prosperity that Cienfuegos enjoyed, they decided to expand it. In 1842 it already served as presidential housing, city hall and prison, and remained so until the 1920s. From then on it has been gradually remodelled until it reached its current appearance in May 1950. Since then it has been carefully preserved, allowing you to see it in all its splendour.

It is a colossal building of colonial neoclassical style that stands out for the symmetry of the lines that compose it. The icing on the cake is the sinuous dome that crowns it, inspired by the Catedral de Santa Maria del Fiore in Florence. This one, of a reddish tone, stands out with the pastel colours of the facade and the yellow of the windows. The cornices, friezes and various reliefs that decorate it are painted white, giving it an even more monumental air.

Nowadays, it is the seat of the Provincial Assembly and a symbol for the Cienfuegos people. The interior is not accessible, but its exterior is certainly worth seeing.

For the best deals and our award-winning personal service book your Cuba Holiday with us by calling 0800 270 7644.