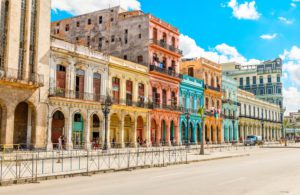 Havana, Cuba’s colourful capital, is known for the Spanish colonial architecture of its 16th-century Old Havana core, including Morro Castle, now a maritime museum, and the pre-revolutionary Capitolio. 1950s American-made cars line the city’s streets, and rumba groups play in the painted alley Callejón de Hamel. Salsa emanates from clubs, and cabaret is still performed at the famed Tropicana.

Life in the city passes by surrounded by music, tradition, culture, national monuments and natural attractions of immeasurable value. Dances and Cuban “sones” spread to each one to this land’s children and to those who visit it as well; customs and traditions remain untouched and join new national and international celebrations to amaze visitors that plan a visit to La Habana, making it their Caribbean destination.

The original settlement, known as Old Havana or Habana Vieja, is located along the west bank of the city’s harbour-mouth. Although the city has sprawled out in numerous directions, the vast majority of the cities historic sites, places of interest and best accommodation can be found in this compact, walkable part of the city.

Declared a UNESCO World Heritage site back in 1982, the intervening years have seen many of Old Havana’s numerous colonial buildings and public spaces restored to their former glory while, in stark contrast, others seem on the brink of collapse. It is this juxtaposition, played out across the city, that is one of the most compelling aspects of any visit to the city.

Aside from its wonderful, historical legacy, Havana is also world-famous for its vibrant culture and theatres. This is a city that is alive with music, dance and people having fun, night and day. For our golf fans, there is also a great course in Habana.