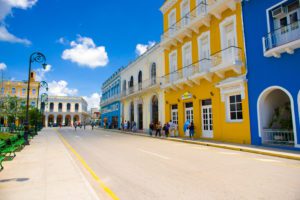 Visit the true paradise of Sancti Spíritus Province and enjoy its culture, nature and its important and recognized places. Its capital is the identically named Sancti Spíritus. Another major city is Trinidad. The southern coast of the province is flat, but the western portion of Sancti Spíritus province is mountainous. The southeast has numerous mangroves and swamps. The northern coast contains significant wetlands and protected areas such as the Bay of Buena Vista and the Caguanes National Park.

The largest human-made reservoir in Cuba, the Embalse Zaza, is in Sancti Spíritus province.

Sancti Spíritus preserves its old town buildings which denote the diversity of styles which for three centuries was enriched by various colonial eras. What is noticeable is its confusing urban styles and among which stand out the Iglesia Parroquial Mayor Church, the Principal Theater and the Bridge above the Yayabo River. Trinidad, which is considered a city-museum, is the one which has one of the most complete colonial architectural examples, a fact recognised by the UNESCO in December 1988, when it was declared a World Heritage site. Stand out the Plaza Mayor Square and the Iglesia Mayor de la Santísima Trinidad Church, which treasures among its most valuable pieces the famous True Cross.

In a testament to the splendours of the peak of the sugar industry in the village of Trinidad in the 17th century,  the nearby large Ingenios Valley, which was also declared World Heritage by the UNESCO stands as a prime example of days past.

Just a short distance from the old town of Trinidad are the beaches of the Ancón Peninsula and Blanco Cay, bathed by the waters of the Caribbean Sea and considered among the best ones in the Southern coast of the island. Also, a short drive away is the mountain massif of Escambray which invites the most adventurist ones to enjoy days of intense activity in the Topes de Collantes National Park, located 800 meters high above the sea level where the National Monument of Salto de Caburní Falls is situated. Also situated in the central part of the province is the largest artificial lake in the country, the Presa Zaza Dam, which is full of trout which due to the level of care reach sizes larger than normal. Ideal for fishing.

Towards the North of the province of the Caguanes National Park was recently declared by UNESCO as Biosphere Reservation, has an important cave system in which you can find numerous places with archaeological interest and flooded caves.

History
During the 17th century, both Dutch and British pirates attempted to take control of what is today Sancti Spíritus province, but with little success, as the Spanish garrison held them off. From 1660 to 1680, Trinidad was plagued by pirates from Jamaica and Tortuga, and on two occasions, pirates razed the city.

The provinces of Cienfuegos, Sancti Spíritus, and Villa Clara were once all part of the now-defunct province of Las Villas.

Tourism is a big earner for the province, with most of the tourism centred on the old city of Trinidad, a World Heritage-listed city which has dozens of colonial buildings (and almost no 20th-century architecture), dating back to the Spanish conquest in the 16th century.

Francisco Iznaga, a Basque landowner in the western portion of Cuba during the first thirty years of the colonization of Cuba, was elected Mayor of Bayamo in 1540. Iznaga was the originator of a powerful lineage which finally settled in Sancti Spíritus and Trinidad, the location of the Torre Iznaga. His descendants fought for the independence of Cuba and annexation to the U.S., from 1820 to 1900.

In the area, as with most of Cuba, sugar cane and cattle are important commodities. Large surfaces are irrigated in the farmland between Zaza Reservoir, Zaza River, and Jatibonico River in La Sierpe region. Some tobacco and rice are also grown.